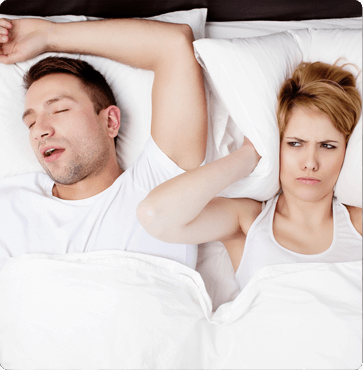 When breathing is repeatedly interrupted during sleep, the condition is called sleep apnea. It can have serious negative effects on your health. People with sleep apnea may often be tired, irritable, forgetful, and prone to headaches.

Sleep apnea can also lead to serious complications such as heart disease, stroke, diabetes, glaucoma, and more by repeatedly reducing oxygen flow to vital organs in the body and causing heart rhythm irregularities.

Often, people aren't aware they have sleep apnea. Instead, a family member or bed partner is usually first to notice the telltale pattern: the sudden absence of breathing for at least 10 seconds, possibly lasting as long as a minute or two, followed by a big snort or gasp for air. A jerk of the body may also occur as breathing resumes. The pattern recurs throughout sleep, sometimes as often as hundreds of times a night.

Loud snoring, especially soon after falling asleep, is a symptom of obstructive sleep apnea. Snoring is the sound made by air squeezing through a narrowed airway in the throat and nose. Loose or excess tissue in the nose and throat are more likely to vibrate with breathing and result in snoring.

Obstructive sleep apnea occurs when muscle tissue in the upper throat relaxes, blocking the airway. Certain lifestyle choices can trigger or worsen sleep apnea such as drinking alcohol, obesity, medications that relax the muscles, and sleeping on your back.

There is a second but much less common type of sleep apnea called central sleep apnea. It occurs due to a dysfunction of the body's central nervous system (when the brain intermittently fails to signal respiratory function) rather than airway obstruction.

After lifestyle changes, devices that aim to regulate nighttime breathing are a popular treatment choice for obstructive sleep apnea. This includes use of a continuous positive air pressure (CPAP) machine, which is a mask worn over the mouth and nose during sleep. It pumps pressurized air into your airway while you sleep, helping to keep the airway open. Mouthpieces or oral devices that keep your lower jaw positioned forward may also help keep the airway open while you sleep.

When those treatment methods fail, your ENT doctor may recommend surgery. The most common include procedures to:

Less common surgeries include correcting structural problems in the area, such as surgically repositioning bony structures in the upper airway or bypassing the blocked airway with a surgical opening in the windpipe (tracheostomy).

Although cosmetic concerns usually prevent a tracheostomy from being a popular choice among patients, it may be the most effective treatment option: almost all people who opt for a tracheostomy are cured of their obstructive sleep apnea.

At ENT & Allergy Center of Austin, we offer in-office sleep apnea and snoring treatments. For an appointment, call (512) 328-7722 or request one online. We see patients in offices throughout central Texas: Westlake, Cedar Park, or Round Rock.

Learn about allergy, ear, nose, and throat conditions and treatments in our patient education center.

See what our doctors are up to and tune into the latest ENT and allergy news that matters to you.