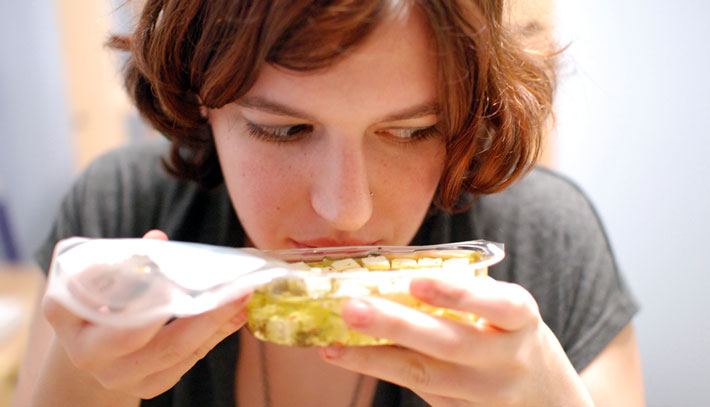 People occasionally eat with their eyes. That’s why frou-frou chefs think that presentation is the key to a person’s stomach. Other’s rely mostly on their taste buds. Then there are the millions of Americans who use their sense of smell when they dig-in to a tasty meal.

Don’t want to ruin your appetite, but mucus — or too much of the goo — can leave you sitting down to a nice plate o’ grub and block your sensation to that plate of steak.

We came across this item in the research publication “Science Daily.”

“Robert I. Henkin, founder of the Taste and Smell Clinic in is charmingly self-deprecating. He says with a chuckle that he’s often called a “spit and snot doctor,” but he knows all too well that for his patients – those who no longer can appreciate the fragrance of fresh-cut grass or the intricacies of an herb-infused sauce – such loss is no laughing matter.”

“You might think: ‘Oh well, you can still hear. You can still see.’ But it’s amazingly important to be able to taste and smell,” Henkin says. “When you say ‘hello’ in (some parts of China), you don’t say ‘hello’ – you say ‘Have you eaten yet?’ In other words, the social aspects of being able to eat and enjoy are critical, and to lose that – you lose a significant part of life.”

The good doctor conducted a first. It was a clinical program to drill into when someone’s taste and smell went on the fritz. The mission: To discover what mucus and taste have to do with each other. In other words, what impact does mucus and saliva have on enjoying breakfast, lunch and dinner.

“The thing to recognize is there are 21 million people in the United States who have some abnormality of smell function. That’s an amazing number,” says Henkin.

Seemingly, it has something to do with of cytokines. Those are tiny molecules that signal a cell in nasal mucus. Henkin and his team discovered that in the mucus of patients with a loss of the sense that there was an overabundance of anti-inflammatory cytokines — much higher than the concentrations of pro-inflammatory cytokines. Why is the balance important? Basically, so your schnozzle works on all 6-cylinders.

“We’d looked at the literature and recognized that IL-6 is obviously elevated in a number of inflammatory diseases, such as rheumatoid arthritis. As a matter of fact, with rheumatoid arthritis you commonly have smell loss,” Henkin says. “We’re trying to make these connections, you see, and understand the relationships in these underlying interactions – to give people some idea (about) homeostasis in the nasal cavity, how it’s occurring, what’s in nasal mucus and how each of these substances plays a specific role in smell function.”

“In a rather naïve way, we went ahead and looked at these cytokines in nasal mucus because nobody’s ever done it before,” Henkin explains. This kind of strategy is par for the course for Henkin, who also was the first to report which proteins are present in saliva in 1978 and which proteins are present in nasal mucus in 2000. He emphasizes that “you can’t understand the (disease) mechanisms unless you understand what’s there.”

“This whole role of nasal mucus – what’s there, how it works – is something that (researchers) haven’t really considered,” he says. “It takes a dumb guy like me to go ahead and say ‘OK, let’s figure out what’s there, and then we can see what we’re going to do about it. It’s a different approach.”

Dumb guy? Feh. His work at the National Institutes of Health may lead to a large percentage of our population being able to enjoy a nice hot fudge sundae someday. Make sure the waiter puts a cherry on the top of the whipped cream. Maybe some sprinkles, too.