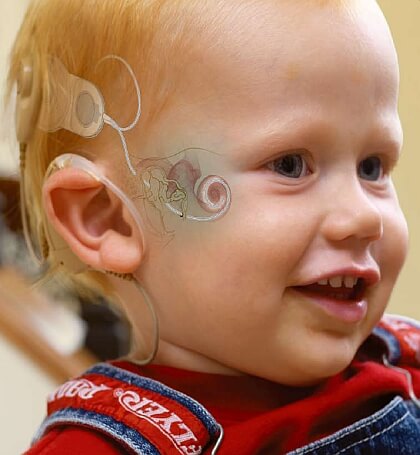 The sound of life. A friendly voice. Beautiful music. Children laughing.  Things that excite everyone in our Austin Ear Nose And Throat Clinic!

Imagine that all disappearing. Not quite dead silence, but pretty close to it. Left to your thoughts in a noiseless world.

For many people, that changed in 1978. It all began with a phone call from Dr. House. Not that one played by Hugh Laurie. This scientist wasn’t named Dr. Gregory House. He was known as William F. House. He rang-up Dr. Richard T. Miyamoto. The two knew each other. House was Miyamoto’s mentor.

Dr. House was on the phone asking Dr. Miyamoto to become part of a team. A clinical trial team studying the concept called cochlear implants. Later, Dr. Miyamoto is reported to have said, “Most of the experts in hearing science were very down on implants in those early days. They felt that success was unobtainable. But there wasn’t any treatment for sensorineural deafness at the time and, during my fellowship at House Ear Institute, I had seen that this technology was life changing for patients.”

Life Changing, Indeed
Six years later, because of their work and such striking results, the U.S. Food and Drug Administration approved the 3M/House single-channel cochlear implant. Dr. House lived to a ripe old age of 89, dying just last year in 2012. But he lived long enough to change hundreds of thousands of lives and see his and Dr. Miyamoto’s work undergo light-speed changes.

By 2010, more than 219,000 patients in the world had the surgery. Drilling-down in the U.S. alone 42,600 people received cochlear implants. Nearly 30-thousand of those performed on kids.

Before That
You really want to know when this technology started? Go back to the fellow who invented the electric battery. Alessandro Volta. He connected his ears (for some reason … you know, scientists love to fiddle around) to a 50-volt circuit. When he flicked the switch, he got shocked, of course. But he also heard a sound. Volta described it as what you’d perceive when you were boiling soup.

It led to many other scientists experimenting with the effect that electricity has on ears. Fast forward to the middle of the 20th century. That’s when surgeon Charles Eyriès and neurophysiologist André Djourno hit the next important milestone. Eyriès was operating on a patient with ear issues. He put an electrode designed by Djourno on a portion of the patient’s auditory nerve.

Once Eyriès discharged the patient, the one with the affliction said they could hear some words, some sounds. The eggheads considered it a failure, but a French medical journal reported the experiment. Dr. House had a patient who brought this to the M.D.’s attention. We can only imagine what when through House’s mind when he read the article.

Overseas
Today, the implants have become so commonplace that we’re seeing the devices placed in 6-month old infant’s ears. And there’s even an new apparatus that let the user go swimming.

A final note. Whether you like his politics or not, one of the most famous people in the U.S. who has had this procedure done on him is radio talk-show host Rush Limbaugh. There’s got to be something to it if a guy who relies on an audio-only medium is able to keep working.