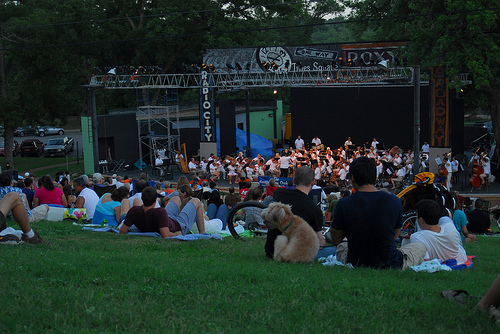 Those who are looking for the perfect way to cap-off Father’s Day this Sunday evening, the ENT Center of Austin has got a plan to do it and give those ears of Pop’s a treat. We invite you to hear the Official Band of the City of Austin at Zilker Park.

Called “Father’s Day in the Park,” the nationally recognized cultural treasure plans a sunset concert. Get there around 6 and enjoy tunes until the notes run-out.

The musicians will help you celebrate the yearly tribute to dear ol’ dad with its annual concert at the Zilker Hillside Theatre. Take him to a fine restaurant in the mid-afternoon, then pack a picnic basket (don’t forget the wine!) and spread out a blanket under the Pecan trees at the Hillside Theatre.

What’s On Tap?
We’ve managed to get our hands on a program of the music the family will hear on this special evening. Check this out!

A Bit of History
Music at the Zilker Hillside Theater has been tradition for over 50 years. It all began on September 1st and 2nd, 1959.
Throughout  the years, music has flowed from an Austin Parks and Recreation Department’s project for high school students, evolving into the highly professional theatrical productions of Broadway musicals under the stars.

To honor the founder of the Zilker Summer Musical, it was renovated in ’98 and named the Beverly S. Sheffield Hillside Theater during its 40th anniversary season.

And For Those Needing Special Attention
The park caretakers boast this on their website:

“There is handicap parking and wheelchair access to the immediate left and right of the backstage area of the theater building. There is a ramp that accesses a continuous route to the ADA area in front of the actual stage. ADA seating is provided on a first-come, first-served basis. There is room for approximately 16 wheelchairs in the first row, right in front of the stage. Companions of ADA attendees are welcome to sit in the first row as long as it does not displace others in need of ADA access.

As we mentioned off-the-top, it’s a free way to have a good time with the men of your life. The tunes the musicians will perform are meant to inspire, lift spirits, enjoy and give those ears a work-out without lifting a hand. That is unless you have a picnic basket. Our suggestion: Get one of your kids to carry it.